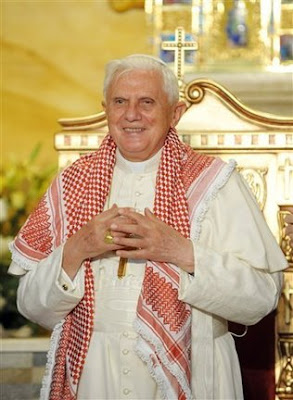 In case you missed it: (Thanks a mill to Waleed, who alerted me to this.)

Here's the caption for this photo, which I found courtesy of the Charlotte Observer:

In this photo made available Saturday, May 9, 2009, by the Vatican newspaper L'Osservatore Romano, Pope Benedict XVI wears a traditional Jordanian "Kaffiyeh" during his visit to the Lady of Peace Church in Amman, Jordan Friday, May 8, 2009. Pope Benedict XVI expressed deep respect for Islam Friday and said he hopes the Catholic Church can play a role in Mideast peace as he began his first trip to the region, where he hopes to improve frayed ties with Muslims.

Note: a red kufiya in this context signifies Jordanian identity, and not Palestinian, not Hamas, not PFLP, not Communist.

Posted by Ted Swedenburg at 9:45 AM