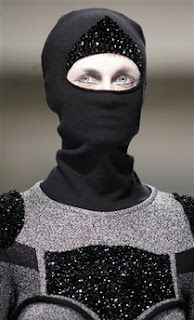 Check out this fashion item from the current London Fashion Week. The caption on Yahoo! News says, "A model wears an outfit by Fashion East designer Louise Golden during her catwalk show at London Fashion Week in London, Monday Feb. 12, 2007. The designers are showing their Autumn/ Winter 2007/8 collections. (AP Photo/Alastair Grant)" (Thanks to Chris for bringing this to my attention.) 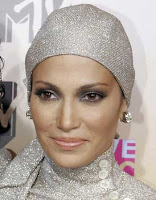 (Note that Muslim women have been wearing fashionable headgear for some time now--see for instance the items at HijabShop.com.)

Fox News carried a related article on February 6 by Catherine Donaldson entitled "Bye Bye, Hair! Hello, Turban Chic," which I initially discounted but now am inclined to take more seriously. Donaldson reports that designers like Prada, Marc Jacobs and Ralph Lauren, and chain stores like H&M are now offering turbans (Donaldson also calls them "full-on headscarves") for women, some as expensive as $700, and that they have been sported by Katie Holmes, Jennifer Lopez, Eva Mendes and Prince (at Superbowl half-time). 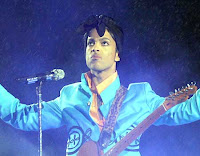 The "turban" hearkens back to '40s, '50s, and '60s fashion, when it was worn by the likes of Joan Crawford and Ava Gardner. Donaldson also notes that, "Some [observers] speculate that turbans are popping up on women because of India's increasing influence on Western pop culture and a growing post-Sept. 11 interest in Pakistan, Afghanistan and the Middle East." Sounds like more Orientalist confusion to me, a mash-up of the turban worn by Sikh men and the headscarves of pious Muslim women in Islamic cultures.

And here's a couple more strands noted by Donaldson: "the style has been adopted by hippie chicks on the one hand and women embracing their African roots on the other (think India.Arie and Erykah Badu)." 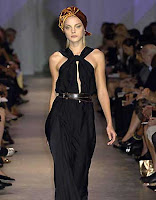 Fascinating that such style is showing up on London and Paris fashion catwalks (photo at left is a Prada turban at the Paris spring fashion show) when British politicians like Jack Straw, prominent Labor Party politician and Leader of the House of Commons are campaigning against veils worn by British Asian Muslim women. In early October 2006, Straw published a controversial article stating that he asked Muslim women constituents who visited his office for consultations to raise their veil, if they wore a niqab (a full veil with a slit for the eyes) so that he could see their eyes. The veil (i.e. niqab), he wrote, is a "visible statement of separation and difference." Both both PM Tony Blair and his presumed successor, Gordon Brown, chimed in to support Straw. Blair too has stated that the veil is a "mark of separation" and that it has made some "outside the community uncomfortable," while Gordon Brown said it would be "better for Britain" if fewer women wore veils. Brown also asserted that immigrants "should speak the language of English."

I don't read J-Lo, Katie Holmes', and Prada's embrace of the turban as indicating any kind of dissent from Labour politicians Straw, Blair and Brown. Erykah Badu, who comes out of a Nation of Gods and Earths background, is another matter, however. And then there is Cat Power's very intriguing use of hijabs in her video for "Living Proof."
Posted by Ted Swedenburg at 1:56 PM

Email ThisBlogThis!Share to TwitterShare to FacebookShare to Pinterest
Labels: hijab

great blog. i too have been pleased with the prospect of couture french fashion's unwitting support for religious garment wear in their public buildings. there's nothing like art, fashion, and sometimes consumerism to bring about unexpected cultural understanding. thanks for the updates!

Hi,
I am linking to this post along with a photojournalism work from France on Muslim women and fashion.
Great blog.

Anonymous said...
This comment has been removed by a blog administrator.
4:10 AM

Theres a lot coming out of hijab fashion these days like the stuff muslimbase.com are launching

Anonymous said...
This comment has been removed by a blog administrator.
1:15 AM